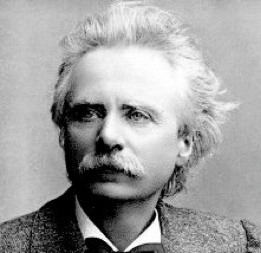 “The ‘general public’ for which Grieg longed is us – and he is still waiting.

The musical legacy that he left us is larger, and deeper, and richer, and

more varied than most of us have imagined.

It is time for us to claim it. Let us do so without delay.”

Edvard Grieg was born in Bergen, Norway in 1843. John Horton, in his biography Grieg,provides the following chronology as one of his organizing tools:

Grieg’s stature as “Norway’s greatest composer” is generally recognized, but Grieg’s status as a “great” composer without the Nationalist modifier is not so generally acknowledged. Part of the difficulty in making a case for Grieg’s greatness as a composer is the relative paucity of knowledge among the general concert going public about his music outside of the Peer GyntSuites and the Piano Concerto; composers of the succeeding generation, though, seemed to know his music well. Debussy and Bartok were influenced significantly by Grieg’s music. William Halverson traces Grieg’s influences to “Sibelius in Finland, Carl Nielsen in Denmark, Delius in England, Grainger, MacDowell and Gershwin in the United States, Debussy and Ravel in France and Bartók in Hungary.”

Halverson asks, “Have not certain features of Grieg’s harmonic style had some impact on twentieth-century popular music and on certain film music composers?” Certainly Grieg’s harmonic influence can be heard in the work of film composer Hans Zimmer, as well as in fellow film composer Howard Shore’s score to The Lord of the Rings trilogy (which includes as a significant solo instrument the Norwegian Hardanger fiddle).

Note from the Publisher:

As with many people, my knowledge of the music of Grieg was largely confined to music from the “Peer Gynt” Suites and his Piano Concerto. However, in one’s studies of the music of Percy Grainger, one is often reminded that Grainger’s chief musical influences (according to Grainger) were Bach, Delius and Grieg, and so if one knows little of Grieg, one must look closer.

It must be admitted that Grainger’s affection for Grieg had personal roots. In 1906, near the end of his life, Grieg took Grainger under his wing at a time when Grieg’s influence was very beneficial to Grainger’s career as a pianist. Grieg coached Grainger in preparation for a concert at the Leeds Festival in which Grieg would conduct and and Grainger would play the Piano Concerto; Grieg’s death unfortunately intervened. Grainger’s edition of Grieg’s Piano Concerto is considered by most pianists as the authoritative version, and Grainger’s reputation as perhaps the leading interpreter of Grieg served him well during his performing career.

Both found the conservatories largely stifling of their interest in pursuing music that deviated from the traditions of their respective times; their respective lacks of sympathy for traditions were not to end with their Conservatory experiences. Both developed lifelong friendships with countrymen met during their conservatory days. Oddly, both incorporated their mothers’ maiden names (Hagerup for Grieg and Aldridge for Grainger) as middle names (most Grieg scholars dispute whether Grieg ever made himself known as Edvard Hagerup Grieg, but there is certainly plenty of published music using that version of  his name; the coincidence with Grainger’s renaming himself Percy Aldridge Grainger from his given name of George Percy Grainger is rather striking). Like Grainger, Grieg was known primarily as a miniaturist, and like Grainger, his larger works have been neglected.

Percy Grainger credited J.S. Bach, Frederich Delius and “Dear Old Grieg” as the three major musical influences in his musical life. One of Aux Arcs Music’s goals is to bring the music of this important composer to the attention of band musicians at all levels.