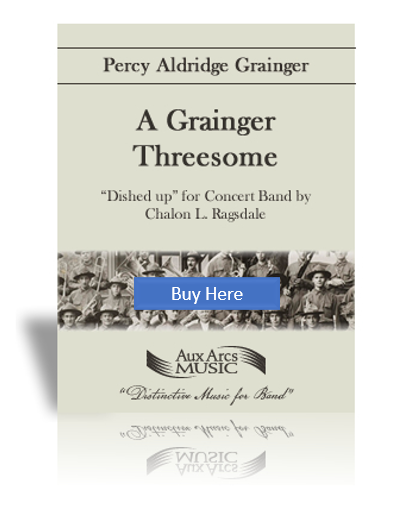 "...a balanced set of lyric and lively works."
-The Instrumentalist, April 2007

Children’s March is one of the greatest of Percy Grainger’s band works. Grainger extracted a portion of Children’s March, setting it for piano, at the same time (1916-1918) as his full arrangement for Band. The idea to repeat the last two-thirds of the piece (in a different orchestration) was inspired by Penelope Thwaites’ performance of the piano excerpt in her CD, “Chosen Gems for Piano” (1992 Unicorn-Kanchana Records).

In June 1900 Percy Grainger and his mother Rose took a holiday in Scotland. The holiday of 1900 was financed by Karl Klimsch of Frankfurt, Germany, an art dealer, amateur composer, friend of Grainger’s student years, and Grainger’s acknowledged mentor in composition. Grainger took with him to Scotland (borrowed from Klimsch) the two volumes ofSongs of the North (gathered together from the Highlands and Lowlands of Scotland). While in Scotland, under the impact of his first impressions of the country (and immediately afterward in London) he made 12 arrangements of Scottish folksongs for voice and piano and two for choir, using the melodies and texts from Songs of the North. His harmonization is highly original, and demonstrates the Grainger intuitive response to folk melodies.

As Sally Sat A-Weeping is an English Folk-song from Dorsetshire which Grainger discovered in a copy of the Journal of the Folk-song Society. It was sketched for 2 pianos on Jan 1, 1908 in London and finished in the fall of 1912 while Grainger was on tour in Denmark.

The piece had a special meaning to Grainger because of his mother Rose’s involvement with him in making a Duo-Art piano roll (a kind of very accurate player piano) recording of the piece. The 2-piano version was published by Schott in 1924, two years after Rose’s death.