Selections from Songs of the North 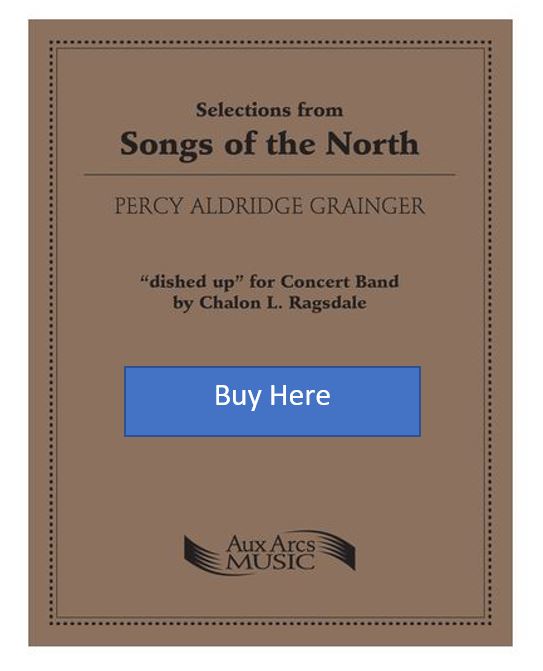 This wonderful Grainger collection for band features three pieces from a larger collection of 12 – "Willie's Gane to Melville Castle," "This is No' My Plaid," and "O Gin I Were Where Gadie Rins." Selections from Songs of the North is a Grade 3, well-suited for the mature junior high or high school band. Duration 5'.

In June of 1900, Percy Grainger (1882-1961) and his mother Rose took a holiday in Scotland. The trip was financed by Grainger’s “only true teacher of composition,” Karl Klimsch, a successful lithographer and amateur musician who lived in Frankfurt, Germany. Grainger had studied at the illustrious Hoch Conservatory in Frankfurt, Germany since 1895, but rebelled at the strict, conservative composition training of his teacher, Ivan Knorr, and flourished under Klimsch’s encouraging and idiosyncratic instruction. Grainger was a piano prodigy, having started what we would consider collegiate level music studies at age 13, but composition was his actual “first love.”

Grainger took with him to Scotland (borrowed from Klimsch) the two volumes of Songs of the North (gathered from the Highlands and Lowlands of Scotland)edited by A.C. MacLeod and Harold Boulton, with music arranged by Malcolm Lawson and J.B. Cramer. From the MacLeod/Boulton collection of 96 tunes, Grainger selected 12 for treatment, and we’ve chosen 3 of those for our edition.

Grainger had almost no “evolution” as a composer; these settings, though simple, and made when he was only 18, do not need to be considered “early Grainger.” He was already in full bloom as a composer, and the settings are uniquely and obviously Grainger. They are “at one” with the folk songs, and give us a foreshadowing of Grainger’s later work with English folksong.

1. Willie’s Gane To Melville Castle
A comic song. Willie has been a regular visitor at Melville Castle, where he’s going to say his good-byes before striking out to seek his fortune. “O what will a’ the lasses do When Willie gangs awa’?” Lady Kate, Lady Grace, Lady Bell and Lady Jean all hope that each is his favorite. “Their cries, their tears brought Willie back, He kissed them one and all, ‘O lasses bide till I come home, And then I’ll wed ye a’.’”

2. This is No’ My Plaid
The story is one often told – a young girl in love with a young man of whom her family disapproves (“His name I dare not tell”). His plaid is not her family’s plaid.

3. O Gin I Were Where Gadie Rins
A story of longing for home. So many Scottish folk have had to leave Scotland, for a variety of reasons, and their longing for their country and people is a strong sentiment in Scottish folk song. The Gadie is a Scottish river that runs at the foot of the Bennachie mountain range. One of the verses reads, “Though few to welcome me remain, Though a’ I love be dead and gane, I’ll be back though I should live alone, To the foot a’ Bennachie.”