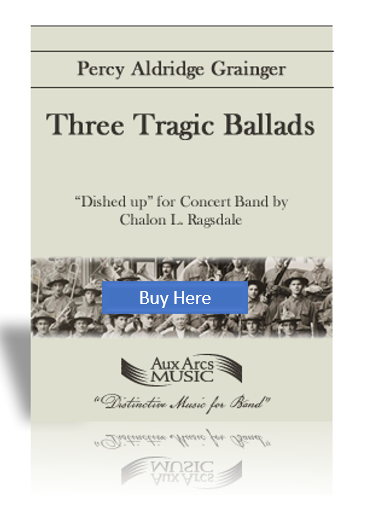 ...this set of tunes is a fine addition to the repertoire."
-The Instrumentalist, Feb. 2006.

Danny Deever started life as a poem from the “Barracks Room Ballads” of Rudyard Kipling, a major cultural hero of Percy Grainger’s. Grainger scored the piece for small male unison chorus, large male choir, and a large orchestra including saxophones and euphonium. The song tells the story of Danny Deever, a British soldier in foreign service hung for a minor offense. Grainger’s setting captures beautifully the contrasting moods of boisterousness, horror and “whistling past the graveyard” so common in a soldier’s experience.

The Three Ravens is Nr. 41 of the British Folk-Music Settings. It is “lovingly and reverently dedicated to the memory of Edvard Grieg”, as are all the BFMS works. The piece is originally scored for Baritone Solo and Mixed Chorus accompanied by 5 Bb Clarinets. The folksong The Three Ravens was not collected by Grainger; like Irish Tune from County Derry he found the tune in an existing collection. The harmonization, finished in 1902, captures beautifully the transcendental nature of the text, with masterful use of chromaticism and the Grainger “gliding tones.”

Father and Daughter Nr. 1 of the Settings of Dance-Folksongs from the Faeroe Islands. “Composed in 1908-9, it is scored in the original for five solo voices, described as ‘narrators’ because they tell the tale, with a double mixed chorus actively representing the ‘tribe’, and with three orchestral groups of brass, strings, and mixed mandolins and guitars (as many as possible).” (Wilfred Mellers in Percy Grainger). One of Percy’s most exciting pieces, John Bird tells us that, at the premiere performance of Father and Daughter at the Queen’s Hall in 1912, Grainger received twelve curtain-calls, and the piece had to be repeated twice!